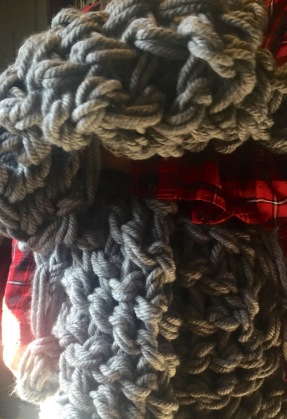 My sister-in-law and I were talking about arm knitting the other day. (For those of you who don’t know what that is, it’s just like knitting but your arms act as the needles.) I’ve never done it before, but I thought I would give it a shot and give my sister-in-law an arm knitted blanket for her birthday.
My first search was a Pinterest search, which was as far as I needed to go because a found a blog called Simply Maggie. She has an awesome tutorial about arm knitting blankets that told me everything I needed to know. I did run into a couple roadblocks, though, but I’m prepared to help you avoid those.

What you need
Yarn
In the tutorial, she tells you to use Couture Jazz yarn, but I searched everywhere and unless you want to order it, you have to find other yarn. This was the biggest issue because the Couture Jazz yarn is so nice and thick that it gave the blanket she made a chunky look to it.

So after picking a thick yarn, I made a blanket that had
giant holes in it and didn’t look like a blanket at all.

I had to tear it apart and start all over again.

The second time around I tripled up on the yarn by tying three spools of yarn together, which gave it the thickness I was looking for.

Scissors
You will need a sharp pair of scissors to cut the yarn without fraying the end too much.

Arms
You’ll need two of those.

What you do
I followed the technique on the tutorial pretty closely. Because of the difference in yarn, my blanket needed a few extra feet to begin with, so I made the tail about 13 feet. Although, when I make another blanket, I will go even longer than that because I want it to be wider.
I advise to make your first row and see how wide it is. If you want to make it wider, you can pull it apart and start over. That is easier than getting to the end of your blanket and realizing that it’s really skinny.
Another technique difference that I picked up on was to just reach through the layers of yarn when casting on the rows with your fingers instead of your whole hand. This saves a little time.
Lastly, I found a technique that helped me when I wanted to take a break. I would make sure all the strands were on one arm and I would slide them off my arm one by one onto a broomstick. This allowed me to not have to complete the blanket in one sitting.

What you pay
If you’ve ever shopped for yarn, you know it’s not cheap. That’s why you need to know how to coupon and not be ashamed to split up your order in several transactions (the cashier is usually understanding).
I got my yarn at Jo-Ann Fabric and Craft Stores because it has a pretty nice selection. Jo-Ann’s will let you use multiple coupons per transaction (at least they have in my experience) so that helps a lot.
I bought 12 spools of yarn split up into three transactions because I found four coupons (one from the texts I signed up for, one from emails, one from the Retail Me Not app and one from the Jo-Ann app). All in all, I saved over $45!

What’s your experience?
This was my first time arm knitting a blanket, so what are your experiences? Did you find a perfect yarn or have a different technique? Let me know!

One thought on “How to Easily Arm Knit a Blanket”